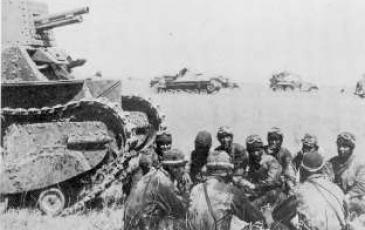 [Western Manchuria, 10 miles W of Nomonhan,]: [H2H] [ HISB] [GD]: In 1931, Japan had seized and occupied Manchuria in northeast China. Beginning in 1938, the aggressive actions of Japan's occupying force, the Kwantung Army, provoked numerous clashes with Soviet and Mongolian forces over disputed boundary lines in the long border Manchuria shared with the USSR and its communist client state Mongolia. By 1939, this series of escalating border clashes constituted an undeclared war between Japan and the Soviet Union. During May - June 1939, Soviet and Mongolian forces begain building up forces in the disputed border area between the Halha River and the tiny village of Nomonhan. The Japanese claimed that the boundary followed the river, but the Soviets maintained that it passed just east of Nomonhan. The Kwantung Army decided that a division size attack was needed to oust the Soviets and their Allies. Lieutenant General Komatsubara decided on an enveloping attack. One attack force (71st and 72nd Infantry, 13th Field Artillery, 23rd Engineers) would erect a pontoon bridge across the Halha River, cross the river, and assault Soviet positions on Baintsagan Hill. This force would drive south to the Kawamata Bridge, destroying Soviet artillery batteries, and supply depots along the west bank. Simultaneously, the Yasuoka Task Force (64th Infantry, 2/28th Infantry, 3rd and 4th Armored Regiments) would attack Soviet forces on the Halha's east bank, north of the Hosten River. The link-up of the two pincer colums would first encircle the Soviet forces and than squeeze them to death. The Japanese decided on a night attack to limit the effectiveness of Soviet observed fire on infantry and tanks. On the night of July 2, 1939, the Japanese crossed the Halha River and stormed the heights of Baintsagan Hill. Simultaneously, LTG Yasuoka Masaomi, commander of Japanese units operating on the east side of Halha, had the mission to drive Soviet troops back from the Halha's east bank. Yasuoka detailed the 2/28th Infantry to cover his right flank, and designated his two armor regiments to commence pursuit operations against an enemy who, based on erroneous intelligence, he mistakenly thought was in full retreat. While a night attack gave his armor a chance of breaking into the enemy lines and reaching the Kawamata Bridge, it also made coordination among advancing Japanese units difficult because the Japanese lacked sufficient wireless equipment, flares, and observation devices. On the night of 2-3 July, there began a wild night attack characterized by individual units conducting independent battles in a driving rain storm. (All options on. No VV. Special rule - No Banzai. Note - Scenario begins as night (5 turns) and than changes to day.]

Herr Straße Laufer Sun Oct 18, 2020 4:10 pm
Probably one of the most boring and one sided scenarios I have ever played. It was really that awful.
“The object of life is not to be on the side of the majority, but to escape finding oneself in the ranks of the insane.”― Marcus Aurelius, Meditations