On the Road to Andalsnes - SB-WW2 Mod 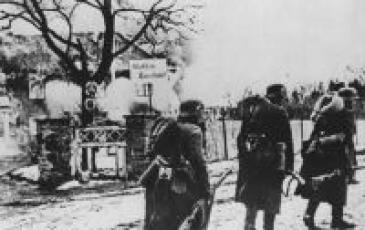 On the Road to Andalsnes

[Outskirts of Dombas, Norway]:[24 April, 1940]:[Norway defend/German advance]: With the sudden Allied landings at Namsos and Andalsnes, the strategic and political importance of Trondheim was brought into sharp focus. Quickly implementing alternative plans, von Falkenhorst ordered the 196th Infantry Division to clear several valleys an isolate that city. \\ On 24 April, lead elements of the German division, advancing along the valley towards Andalsnes, found themselves stymied by fierce resistance in the vicinity of Dombaas from the British 148th Infantry Brigade, which had landed and was moving inland. With ammunition running low and the road behind them threatened by the Norwegian 2nd Division, an urgent message was dispatched for munitions and reinforcements to be pushed forward at all costs. The 196th’s HQ loaded an assortment of commandeered wagons with supplies and sped northward with all available troops. With a roadblock firmly established and troops positioned on the hills flanking the road, the Norwegian commander, advised of the attempted breakthrough , waited confidently.\\ Best as German, or H2H.

Warhorse Thu Jan 20, 2022 12:45 am
A very hard go for the Germans, not only need to take a few objectives and hold them, but also try to exit units as well!
Meine Ehre heisst Treue