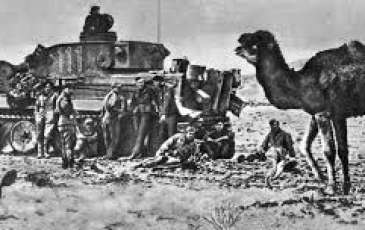 Western Dorsal, Feb 14th 1943: After humiliating losses at Sidi Bou Zid and Sbeitla, the U.S. II Corps scrambled backward to establish a new defensive position, this time at Kasserine Pass, a two mile wide gap in the Dorsal Chain of the Atlas Mountains. For Rommel, the Kasserine Pass was the gateway to Algeria and the way to prevent Allied forces combining. With a series of forceful attacks, starting in mid February, the Germans massed armor and infantry against the ineffectively dispersed U.S. II Corps, pushing the Americans back, seizing huge stocks of abandoned equipment, and breaking through the mountains at the Kasserine Pass into the valley beyond. This was a spectacular success. The Germans hardly paused as they ran over the American defenses. Allied commanders scrambled to throw more and more units to stem the tide, eventually being helped by the shift in German priorities. The British Eighth Army was rapidly approaching from Libya, and Rommel could not afford to continue to the west. [Size, large] Designer Note: This CG is designed to be played HTH.
Show Complete Player Voting Stats
Show Complete Gaming Records

Ricky B
US units appear as reinforcements in the middile of a mountain range - it made me think of Hannibal surprising the Romans, but even that wasn't enough to save the Allied side.

burroughs Sat Apr 15, 2017 10:06 am
Quite an exercise in futility, the Allies have no air power, their assets are deployed in a piece meal fashion and represent quite a motley crew with constantly breaking chain of command.

Witblitz Mon May 18, 2020 9:26 am
too many units locked and if you know their placement, you can run circles around the defenses

typhoon Frid Sep 24, 2021 11:56 am
Sorry but not one of my favorites not enough units and the Allied forces are real rubbish and feel quite hopeless to do very much at all.

Nicholas Bell Tue Dec 14, 2021 8:11 pm
While it might be "historical" the scenario is a real disappointment. My opponent was fighting the clock and mud more than my units which were easily destroyed due to weak strength and low morale. I had few decisions to make since practically all Allied units are frozen in place (serving only as speed bumps to the Axis) until late in the game when there is little time or options for deployment. I've played several different Kasserine board wargames over the last half century and they've been a lot more interesting and fun for both sides without being ahistorical. Definite "thumbs down" on this scenario.