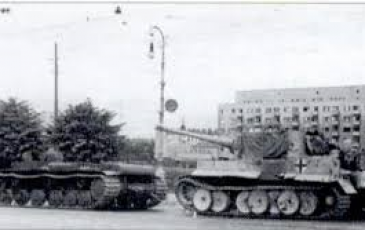 70Km west of Budapest along the Danube River, December 31st 1944: As the final year of the war dawned, the IV SS Panzer Korps launched the opening phases of what would really be the last German offensive of the war. Even though all the forces had not yet arrived at the start line, a surprise attack was launched in two sectors - one with available mobile forces in the Tata region and a second where two river crossings on the Danube had been established by the 96.ID and the Hungarian Szent-Laszio Division. Both sides hastily moved more troops into the region each trying to out trump the other. In the end, after a week of fighting the Germans had to re-think their approach and find a new pressure point to continue the drive to the encircled troops in Budapest. [Size, large] Designer Note: This scenario has been optimized for HTH play.
Show Complete Player Voting Stats

Nicholas Bell Tue Sep 17, 2019 6:41 pm
Plays out "historically." Time limits along with the timed release of formations and the terrain which limits German to a few corridors leave no real options other than to follow the historical script. Disappointed in the OBB which excludes heavy weapons and all divisional level AT assets, other than a few Soviet AT Regiments which is just a fraction of what they fielded. I suppose the rationale was to role these into infantry battalions, but IMO it doesn't work, as the AT ratings of infantry units do not reflect the actual penetration ratings of the ATGs - or PzFausts, etc for that matter. Why this doesn't wreck the scenario is because the Soviet infantry is too strong for this stage of the war, and once dug in are well-nigh invincible, unless one masses Panzers adjacent to them and blasts away for a day or two. Totally unrealistic, as is the Soviet ability to do the same to German infantry. The fact that Soviet tanks can deal with entrenched German infantry in forests and built-up areas without supporting infantry and take no losses as they historically did to Panzerfausts is totally bogus. So while the scenario is "historical" in the movement of the front lines, the mechanics of how that happens is not realistic.

The_General Sat May 29, 2021 12:10 pm
The result of our game was not decided until the last turn. North of the Danube River, the Russians have an advantage and the 6th Guards Tank Army is capable of destroying whatever it encounters. On the other hand, south of the river the attacks of the Germans and their allies are hard to stop and in our game my opponent almost reached one of the Exit Hexes with some of his units. Overall, it's a very interesting scenario.

The_General Wed Jan 12, 2022 8:34 pm
Very enjoyable scenario but it seems that Germans have too many tanks and victory conditions are a bit too harsh for Russians.