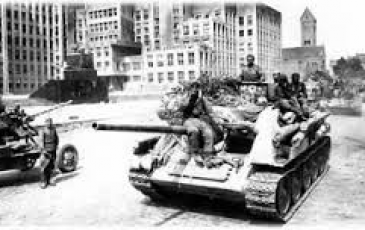 By Saunders & Blackie (Edited by Williams)

Orsha, June 23rd 1944: While the envelopment of Vitebsk salient just to the north was happening, at Orsha, the terrain and the tenacious efforts of the 78.Sturm.Div, entrenched behind a deeply developed belt of obstacles, held up the 11th Guards Army. The original plan called for the early release of the 2nd Guards Tank Corps on the first day of the attack, but this was delayed until the late evening of the second day. Even then, it is possible that the German line in this sector may have held longer had the VI AK to the north been able to hold up the Soviets 5th Army. But once the line was broken to the north, and the Soviet cavalry reserves began to breakthrough, the defense of Orsha was unhinged and the German retreat down the road to Borisov was underway. [Size, medium] Designer Note: Some Soviets Units are fixed with variable release and may remain fixed for the entire scenario. This scenario has been optimized for HTH play.