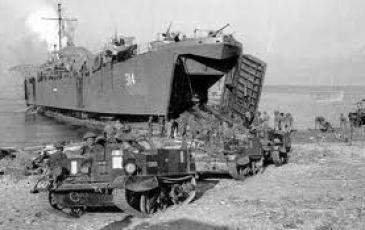 Anzio, February 16th 1944: Generalfeldmarschal Kesselring ordered Generaloberst von Mackensen to make a massive attack all along the Anzio front, but particularly down the Via Anzate. This was really the only route where armor could move without sinking in to the Anzio mud. He wanted to split the Allied front straight down this route to the sea. If this could be done, the rest was seen as merely a mopping-up operation. The barrage started at around 0630, for an hour and a quarter the Germans poured HE into the British and US positions, and followed it up with scores of tanks with thousands of men in their wake. It was now the turn of the massed Allied artillery, naval support, and the massive air power wielded by the Allies. This did not include the tanks, mortars, MGs, and rifles, pouring fire into the massed ranks advancing towards them. The volume of fire slowed the attack, but more men kept coming out of the mist, calling for supreme courage and resolve from VI Corps men. [Size, medium]
Show Complete Player Voting Stats

Many Mariuses Tue Mar 18, 2014 1:19 am
The scenario had several tense and enjoyable moments, but the VP levels appear unbalanced. It requires an Axis breakthrough (including taking large numbers of prisoners) to achieve any result other than a major victory for the Allies.