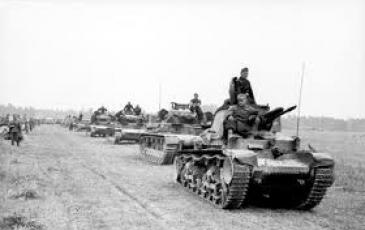 The Battle of Louvain, 15 May 1940: When word arrived that the German army had invaded the
neutral Low Countries in the morning hours of May 10th, General Gamelin ordered his armies to
execute Plan D. Within hours the soldiers of France and Great Britain entered Belgium to meet the
invader. The British Expeditionary Force committed three divisions to the KW Line, a string of
Belgian bunkers and trenches located mostly behind the Dyle River east of Brussels. 2nd Infantry
Division occupied the southern end of the line near Wavre, 1st Infantry Division the central section
of the line in front of Brussels, and 3rd Infantry Division, led by Bernard Montgomery, was to
occupy the northern section around Leuven (Louvain). After a dispute with the Belgian leadership
over which army was to be responsible for the defense of Leuven, 3rd Infantry occupied the city's
defenses and was in place by the afternoon of May 14th. Meanwhile, the Panzers, followed by the
infantry, had advanced rapidly into central Belgium, taking on French mechanized cavalry in
history's first major clash of armor. On May 14th, as the French armor withdrew, the Panzers
attacked the French infantry north of Gembloux. As the battle raged near Gembloux, the infantry of
IV. AK and XI. AK were ordered to probe the British positions at = Leuven. After a weak attempt
on the evening of the 14th, elements of 14. ID and 19. ID were ready to make a stronger effort at
piercing 3rd Infantry's lines on the morning of the 15th. During the long Phoney War, Montgomery
had relentlessly drilled his men and transformed his division into one the Allies' most effective
formations. The men of the 3rd Infantry Division were confident and ready endure the German
onslaught...[Size: Small]