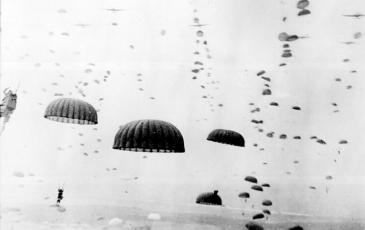 Veghel, along Hells Highway, Sept 22nd, 1944: At dawn of the 22nd, the Germans made yet another strong effort to cut the road north to XXX Corps. Kampfgruppe Walther, supported by the powerful Panzer Bridge 107 formed up east of the highway in the vicinity of Erp. They then drove, with some SS Troops, down the Gemert-Veghel road, while the Panzers moved off through the higher ground to the north. Their plan was to intercept the main road and drive on Veghel from the NE. This time the Germans were determined to cut Hell's Highway once and for all. At this same time, elements of the "Band of Brothers", 100 men from Easy Company, 506th PIR, had moved forward with 4 tanks of the 44th Royal Tank Regiment and were occupying Uden. These were the most northerly troops of the 101st, as most of the Division were involved with the containment of Germans troops in the Schjindel Sector, and with garrison duties along the "Hells Highway" in the Son sector to the south. *This scenario has been approved at H2H Productions*
Show Complete Player Voting Stats
Show Complete Gaming Records