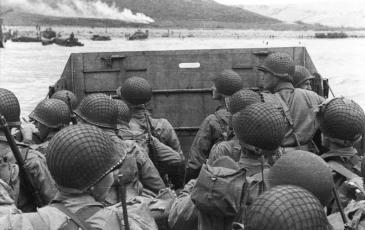 OMAHA Beach, the left flank of the American landing area: At first light on the 6th of June, the men of the German 352nd Infantry Division looked north from their positions on the bluffs to see the horizon as a solid mass of Allied warships. This fleet has come to support the landings of the 1st and 29th US Infantry Divisions. With Col. Rudder's Rangers scaling the cliffs of Pt. Du Hoe, the infantry and DD tanks landing in the surf were met with a maelstrom of German fire. Going was slow and was only made possible through the action of individual leaders like Col. George A. Taylor of the 16th Infantry Regiment who encouraged his men with the words "Two kinds of people are staying on this beach, the dead and those about to die. Now let's get the hell out of here!". Towards late afternoon, as the German inability to resupply their strongpoints became critical, progress was finally made through the draws and into the villages of Vierville and St. Laurent. This 1 day scenario covers the D-Day action to break into the teeth of Hitler's Atlantic Wall. For a 2 day version covering this same battle area, see #08 "Conquering the Bessin".
Show Complete Player Voting Stats
Show Complete Gaming Records