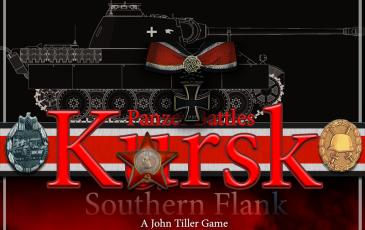 Kalinin, South West of Prokhorovka: July 8th, 1943. (Scenario Size: Corp. Head to Head or Team Play) Major General Andrei Grigorevich Kravchenko's 5th Guards Tank Corp was to go back into action less than 12 hours after having to free its forces from encirclement. The order to retake the area around Kalinin and Ozerovskii was only received at 2am and stipulated that the attack was to commence no later than 10am. Once these two villages were taken, the Guards were to continue pushing west to Luchki North and cut the highway and block the German supplies required further to the north. Kravchenko was assured that both 2nd Guards to the south and the arriving 2nd Tank Corp to the north would be ready to commence operations in tandem with his own forces. The late arrival of 2nd Tank Corp was to leave Kravchenko sorely disappointed. This version of the scenario includes the available forces from 2nd & 10th Tank Corps as well as 5th Guards. 2nd Tank Corp will begin their advance from 2pm.

Jeff Conner Sun May 09, 2021 8:11 pm
This game went down to the wire and if it had been a couple of turns longer, the Russians would have won a major victory. The Russians have almost overwhelming forces but have to capture some difficult objectives to win.

LordDeadwood Sun May 09, 2021 10:23 pm
This game depends a lot on the release of the Russian 10th Tank Corps, which only has a 5% release probability. If both brigades are released with a reasonable amount of time left, the German will be hard pressed. In our game I got one brigade and came within a hair's breadth of a win. Russians need to be aggressive and not let off the gas! Great scenario.