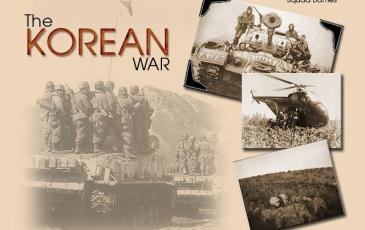 Rick "Tankhead" Cloutier
Scenario size: Large\Estimated time to play: 2 1/2 hours\2 Player
Game? Yes\\Nabu-ri Valley, May 20, 1952, 2200 hours\\Canadian
commander: OK men, get ready it's patrol time again. You know
the drill; capture your objectives and get out of there. Kill
as many enemies as possible, but keep our losses to a minimum.\\NKPA
Commander: Stop the enemy at all costs, prevent him from capturing
our objective and destroy the enemy to the last man.\\Historical
notes: Patrolling - May to June 1952 - During May and June 1952,
the units of the Commonwealth Division patrolled vigorously.
A policy laid down by 1st Corps Headquarters required each forward
battalion to carry out one strong fighting patrol per week against
known enemy positions. At least one prisoner was to be taken
every three days and this difficult and costly task was later
discontinued.\\While the details of these patrols are too numerous
to be recounted here, there were certain similarities in tactics
and conduct. The raiding group varied from a 20-man patrol to
an entire company and heavy supporting fire was provided by artillery
and tanks. In the Canadian sector patrols first crossed their
own wire and minefields at known gaps, then crossed the valley
to the hills opposite. Firm bases were established as close to
the objective as possible for defence and artillery. The actual
raiding party then moved on to the enemy-held objective where
it usually came under mortar and small arms fire. The objectives
themselves were characterized by a maze of trenches which were
often connected to tunnels through which the enemy could readily
move. In this maze it was possible to inflict casualties, but
the patrol itself was subject to attack and found it extremely
difficult to take prisoners.\\One such patrol was carried out
by the 1st PPCLI on the night of May 20-21. The party of 33 was
divided into a firm base group, a covering fire section and a
fighting section. Supporting fire was provided by a troop of
Lord Strathcona's Horse, a troop of the 1st Regiment RCHA, and
the unit mortar and machine-gun platoons. A firm base was established
on the floor of the Nabu-ri valley at 11 o'clock; the main body
passed through at midnight. The covering fire section then took
up positions at the base of the hill below the enemy's trenches.
As the fighting section continued up the slope the enemy opened
fire. The patrol group was outnumbered and had to withdraw. The
patrol sustained one killed and four wounded; enemy losses were
estimated at seven wounded or killed. No prisoners were taken.\\In
addition to fighting patrols directed at enemy territory, the
Canadians also carried out a number of other types of patrols.
Ambush patrols, standing patrols, and reconnaissance patrols
were carried out in formidable numbers to seize prisoners, detect
enemy movements, and serve as sources of intelligence about the
location of enemy weapons.At the end of May 1952 the Commonwealth
Division was ordered to furnish two rifle companies one British
and one Canadian to undertake guard duties over prisoners of
war on the island of Koje. A Canadian unit of the RCR served
on Koje until June 10.\\At the end of June the 25th Brigade went
into divisional reserve. In addition to the normal activities
of reserve, working on the defences of Kansas and Wyoming and
refresher training, they engaged in an operation known as "Noah's
Ark". The monsoon rains of July and the consequent rise in the
Imjin River placed the bridges Teal and Pintail in danger of
collapse. In spite of their efforts, Teal was washed out. However
by mid-September, when the flood abated, Pintail was still in
use. Teal was being restored.\\The Canadians, meanwhile, had
returned to the line on August 10. The return to the line was
marked by an important change in the overall situation. During
the summer of 1952 the enemy had gradually become more aggressive.
He moved into no-man's-land, sent out patrols, raided forward
positions and increased the volume of shelling on the forward
positions. This increased activity was to reach formidable proportions
in October and November.\\The brigade front lay between what
had been the villages of Paujol-gol and Kojanharisaemal with
the R22eR on the left, the PPCLI on the right, and the RCR on
Hill 355 in the centre. During the next three months the 25th
Brigade was to experience heavier shelling and mortaring than
in any other period in the line. Torrential rains would silence
enemy artillery, but the water caused bunkers to collapse or
become unserviceable. When the rain stopped the shelling would
resume. Occupied with improving the defences, the Canadians did
not patrol in any strength until the end of August when PPCLI
and RCR fighting patrols crossed the valley.\\During the first
part of October heavy fighting took place on the American front
to the east, but the Commonwealth Division remained comparatively
undisturbed. This was not to last. Hostile shelling increased
and resistance to patrols intensified. A raid against Hill 227,
by "B" Company of the RCR on October 12-13, was ambushed short
of its objective. Three nights later a 25-man patrol of the Patricias,
clashing with a Chinese platoon in the area of Hill 217, suffered
two killed and eight wounded. The increased enemy activity, particularly
in the vicinity of Hills 227 and 217, indicated that the Chinese
were up to something in that sector of the front. Their intentions
became quite clear a week later.