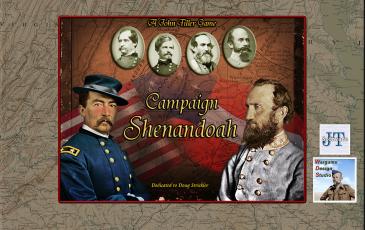 (Historical) Five weeks after the Battle of Kernstown, a strategic Confederate victory, Confederate General Jackson marched his army west along the Parkersburg turnpike and soon encountered Union pickets near Rodgers' tollgate. The Union forces withdrew to McDowell. On May 8th, both sides, almost equally matched in numbers, looked for ways to flank each other. As a commander of either Union or Confederate troops, you must advance and drive your opponent from this field of battle.

Steel God Sat Apr 17, 2021 4:23 pm
It's nasty brutish and short. Played without weather I suspect the Rebels, who sport an amazing 13 leaders for 4 brigades, could steam roll the Union. But time is short so be direct and don't hesitate.

2-81 Armor Sat Apr 17, 2021 6:54 pm
An earlier start or later finish would benefit the CSA Player. 15 Turns is too short when playing with weather effects and the resulting reduced movement rates.

The Union has 2 cavalry units that will stay fixed for the entire scenario, making them useless unless the CSA triggers their release accidentally. While they may have historically been present, including them the way they are up makes little sense.
"And I will show you where the Iron Crosses grow."- Sgt Rolf Steiner, The Cross of Iron