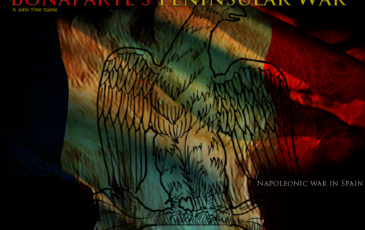 By Rich White
2 - 2 - 1
Albuera 16th May 1811 - With the key fortress of Badajoz under siege by a Anglo-Portuguese army under Beresford, Soult decided to relieve the garrison, hoping to crush the British before General Blake's Spanish army could march to their assistance. However, while Soult knew that a small Spanish force under Castanos had joined forces with the Anglo-Portuguese army, he was unaware that Blake too had managed to rendezvous with the British at Albuera, arriving after dark and carefully deploying out of sight of the French. Soult sent Godinot's brigade, supported by two batteries and Briche's cavalry, directly against the village of Albuera as a diversion, keeping Werle's brigade in reserve, meanwhile the main French attack was launched against the enemy's right flank. While the diversion failed to fool Beresford, it did nevertheless result in most of Blake's Spanish failing to redeploy promptly to meet the real threat.
Show Complete Player Voting Stats

Blitz Shadow Player Thu May 21, 2015 2:25 am
Weather conditions combined with a heavy British/Spanish strength advantage makes it difficult for the French player to win.

phoenix Sat Feb 18, 2017 9:54 am
Excellent and very balanced scenario that yet leaves some limited manoeuvre options to the French. The Allies must react as best they can at first as most forces are fixed. The French can do severe long-distance damage with well placed batteries if the Allies don't carefully check LOS when arranging a defensive line. It seems tight for most of the fight for the Allies, but they have more men coming in and must just hold. How the Allies would get a win is a bit of a puzzle, but a draw is an achievement enough given the balance.

Saddlesore Sun Sep 25, 2022 1:39 pm
Extending the length of the scenario by even a few turns or shortening how long the British are fixed would help balance the game. Overall a fun battle.