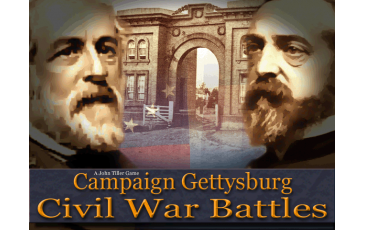 THE SOUTH: On July 1st, as the Army of Northern Virginia concentrates north of Gettysburg, elements of 3rd Corps get permission to advance on the town. The advance aims to both to feel out the Union presence detected there on June 30th, and to search for shoes rumored to be stored there - an item sorely needed by the rebel foot soldiers. As the lead elements near the vicinity of Gettysburg they encounter strong resistance from Union cavalry and soon the fight escalates. 2nd Corps is to move to Cashtown and link up with 3rd Corps. While Rodes' division is in transit pursuant to these orders word arrives of the fight brewing at Gettysburg and the division is turned south at Middletown. Early's division, originally ordered to move to Cashtown via Hunterstown and Mummasburg, had, due to the state of that road, already detoured to Heidlersburg, intending to move from there to Mummasburg. It was at Heidlersburg that the word to move south reached the division. Pender's division moves out after Heth's, accompanied by a battalion of the corps reserve artillery. Anderson's division, camped up the road at Fayetteville, moves out early in the morning, but is halted near Cashtown in the early afternoon, awaiting orders. It arrives later in the afternoon. Johnson's division, after a march of some 25 miles along a road crowded with troops of 1st Corps, arrives near Cashtown at 4 p.m. The exhausted troops push on, followed by those of 1st Corps. Pickett's division, which had been left at Chambersburg guarding the army's rear, doesn't arrive till mid-afternoon on July 2nd. THE NORTH: The Army of the Potomac is concentrated in northern Maryland. Elements of Buford's cavalry division screen to the north of the main body. On June 30th this force makes contact with Confederate infantry. Word goes back to bring up infantry support, setting the stage for a confrontation around the town of Gettysburg. Dawn on July 1st finds the Left Wing of the Union army in position to respond to the call. 1st Corps is camped at Marsh Creek, 3rd Corps at Bridgeport, and 11th Corps at Emmitsburg. 12th Corps, which is not part of the Left Wing, is at Littlestown. Elements of Stannard's brigade, newly transferred to 1st Corps, arrive during the day. Likewise, Lockwood's brigade, scraped together from troops in the east, arrives to bolster 12th Corps. While 1st and 11th Corps move out in a timely fashion, 3rd Corps is inexplicably delayed in moving to Gettysburg. Over the course of the next two days most of the Army of the Potomac concentrates on Gettysburg. Kilpatrick's and Gregg's divisions arrive on July 2nd from their task of screening the Union right and right-rear, and Merritt's brigade arrives on the 3rd after screening the left. 2nd Corps moves from the vicinity of Uniontown, camping near Gettysburg late on the night of July 1st, and arriving on the field in the early morning of the 2nd. 5th Corps, after marching to Hanover, reverses its course and arrives in the area of Gettysburg in the early morning hours of July 2nd. 6th Corps, after initially being ordered to Taneytown, reverses its course and, after a march of some 35 miles arrives near Gettysburg in the mid-afternoon of July 2nd.
Show Complete Player Voting Stats
Show Complete Gaming Records