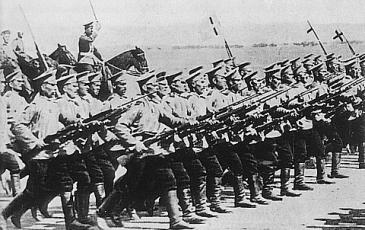 East Prussia, 19th August 1914: In the second week of August, 1914, with German armies already half way across Belgium, and the Austro-Hungarian and Russian armies marching towards each other in Galicia, two Russian armies went on the offensive in East Prussia. The target was the historic Prussian coronation city of Königsberg, a city which the Prussians were determined not to lose. However, the Schieffen Plan had always intended a defensive posture in East Prussia until victory was won on the Western Front, because it was originally calculated that Russian would need nearly two months to fully mobilize. However on the 20th of August, only two weeks after German declared war on Russia, the Russians were already marching into East Prussia with one army, and another army was nearing the frontier. Russia's modernizations since the original Schieffen Plan was devised greatly shortened its mobilization time, causing a crisis in German planning. The relatively small German 8.Armee was alone, expected to do the impossible. In this opening clash between two empires, only an aggressive and active German defense would save East Prussia and likely the entire German war effort. [Size: huge] *See the notes document for information on scenario design decisions and historical notes.
Show Complete Player Voting Stats
Show Complete Gaming Records

Doctor Sat Aug 08, 2015 5:58 pm
The scenario tilts toward the Central Powers but the conditions for a total victory by them are very difficult to obtain. It is a wonderful scenario if you love manuever and whichever side you play you will learn lessons that you will want to apply in another shot at the scenario.

jim pfleck Mon Sep 28, 2015 7:15 pm
Difficult for the Russians to win but if I had played better the first half of the game I would have been able to make a good go at a draw...

typhoon Wed May 09, 2018 5:56 pm
Never did find out what the early termination option was but what a great game

Elxaime Tue Jun 21, 2022 12:23 am
The two armies are distinctive, and each need their own type of handling. I felt was moderately pro-Central Powers since the VP conditions don't seem favorable to Russia generating a true threat of victory due to daunting terrain, 1st Army slowness rules, and lack of Russian army quality.