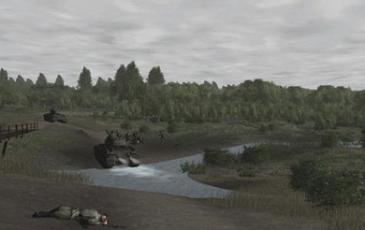 Dawn January, 1945 (Fictional)
Along the river, the Technical University is bombed out and closed. The Soviet juggernaut passed through last night. There is a lone, disabled, but active T-34 in the center of the square that is the focus of your mission.

Wgbn1968 Frid Jun 30, 2017 3:12 pm
Absolutely not-life tactical situation. The Germans can't lose, and the Russians can't win. Some cinematic nonsense. Like the situation described could not arise in principle. The game is based on Hollywood. The author wants to turn tactical simulator the game Call of Duty, and draws his inspiration from the movie "Fury", where Brad pitt with the heroic face does one stupid thing after another.

Shorker Frid Jun 30, 2017 8:34 pm
Played this scenario as the Russians during the Blitz SOTM of June 2017 competition and I must say it was absolutely no fun to play.

My understanding from the mission briefing was that my men (Russians) must reach and defend the broken tank before the Germans can destroy it with a panzerschreck that is already underway. So I started running into the tanks direction, trying to find some good defending positions.

But from the start of the scenario the Germans are already in position close to the T-34 and they are equipped with two heavy machine guns MG-42 on tripod, two elite snipers, a fully functioning assault gun (!)and a handfull of other men (combat engineers).

The Russians nearly have the same number of men as the Germans but instead of an assault gun the have a small AT gun... , a flamethrower team (short range) and one Maxim MG (which is no match against a MG-42 on tripod).

As I don't "spy" for the other troops when starting a fresh scenario in the SOTM competition, I didn't know that the Germans already were in position... - so when I moved my men forward, 50% of them were immediately shred to pieces! AND even in this same first starting minute the T-34 was immediately knocked out by the German assault gun... BOOM! ...wtf??? So I asked myself where is the joke or where is the meaning here?

For me as the Russian player this scenario was no fun to play. Troop mix, troop balance and starting positions are very unfair resp. imbalanced. There should be a warning in the mission briefing that the Germans are already in position and waiting.

The assault gun also should be removed from the scenario as the Germans are supposed to wait for the panzerschreck team but with the assault gun in the back of the T-34 the scenario's story is completely led ad absurdum.
REAL OPPONENTS SEE THE BATTLE OUT TO THE END, WINNING OR LOSING

nortriubuell Thu Aug 03, 2017 3:14 pm
From my view, the worst, and
most unbalanced scenario I've EVER played. 55 Soviets attacking 51 Germans. Russian tank is knocked out within 30 seconds of first turn.Russians have virtually NO anti tank capability. I got really stung early on ... right into the ALREADY entrenched Germans! Ambush city. my troops were shreaded. I retreated and then tried position to "maybe" take the ground ...but why? The T34 ... and its crew were destroyed. Plus my troops would be cut down like wheat, again. I guess my review is like that of shorker, ugh.

Hussar_63 Sun Sep 17, 2017 5:26 pm
I selected well balanced for this scenario even though I got a total victory. This is a very small scenario so if something goes wrong early on it is hard to compensate. Hats off to my playing partner for sticking it through to the end.

Frosty Tue Sep 26, 2017 11:04 pm
this game can be won or lost very easily based on how lucky the german AT soldiers are with their shots. in the game I played my stug bounced 3 shots off the objective t-34. The soldier with the Panzerfaust died and his weapon was never recovered. my flamethrower managed to get in range but didn't get enough of it's flames on target to knock out the T-34 and then finally the PanzerSchreck you get in the last 5 minutes as reinforcements was finally able to kill the tank with two penetrating shots to the turret. The match I played came down to the wire but I think that would be a typical experience for this scenario