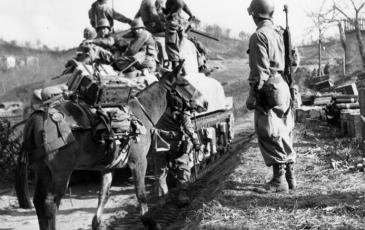 The Germans attempt to break through British Lines,Germans Paratroopers have dropped on Rivisondoli …..with the bridge in their hands Germans are able to advance towards the objectives.

Kandu Tue Oct 17, 2017 12:49 am
This scenario does not need to be play tested to determine play balance. It is self-evident in the scenario design. A read of the designer's notes and a quick look at the map, deployment zones and victory points distribution should answer the question adequately.

According to the designer, the opposing forces are equivalent. On the other hand, both possession of defensible terrain and victory locations at start grant significant advantage to the allied player.

The allied player controls 700 vp at start compared to the axis' 300. For the axis to achieve merely a draw they must capture the fortified, cathedral town Carpione situated on a hill which has overwatch over most of the axis' deployment and movement areas on both sides of the river. Both assaulting the town or bypassing it are fraught with danger. To achieve a win by points, the axis player must cross the river and capture Vitoritto deep in the allied zone after first either bypassing (under fire) or capturing Carpione (fortified uphill), both poor propositions.

In any Combat Mission scenario, capturing a town requires a substantial advantage of numbers or off-map artillery. The presence of large buildings such as cathedrals, apartment blocks and fortifications significantly increase the defender's advantage. In addition when a town has overwatch over the opponent's potential lines of approach or travel the situation only worsens unless the attacker can lay a substantial amount of smoke.

In this scenario the allied player need merely sit on the objectives to win - he already has the points. The burden of attack falls to the axis and the axis does not have sufficient force to overcome the allied terrain advantage.

How could this scenario be re-balanced?

Option 1: Redistribute the victory points as follows; Capione 200, Vitoritto 300 and the axis held river crossing 500. Now both sides sit on the same amount of vp and the burden of attack is equal for both parties. The allied positions are still stronger than the axis, but the allied player can no long just sit on those positions to win the game. I consider this to be the better of my two suggestions.

Option 2: Increase the size of the axis force by at least 50%, perhaps as much as 75% or 100%. I am not sure what size increase would result in a balanced game because much depends on a player's tactics and luck.
Veritas et Equitas

ChappyCanuck Sun Nov 12, 2017 12:54 am
This battle is fun to play. The terrain/geography alone presents interesting challenges. The force allotment is balanced and nicely varied - both sides get significant reinforcements later in the battle. I don't think I have ever given a "10", so a "9" it is :)

nortriubuell Mon Dec 18, 2017 11:14 pm
I just finished this in H2H testing, as the British side. And, I totally agree with Kandu comments above. Don't see how the Axis player has a chance ... without Kandu recommended changes.

Guardsman Mon Jan 01, 2018 1:52 pm
A great map and very good spread of forces for both sides. Really enjoyed this fight
Beware a bug in the results that wont award you Campione if you leave any bunkers un-destroyed, cost me 200 extra points.

weapon2010 Mon Jan 01, 2018 4:46 pm
Great game.Great map.It literally game down to the final minutes.IMHO it should be extremely difficult to dislodge soldiers from towns.Once BF tweeks engine 4 this scenario will be much harder for the attacker.

nortriubuell Frid Jan 05, 2018 2:46 am
The forces are fairly equal, like a meeting engagement. So, I recommend giving the Axis the same amount of victory points at game start, or give them more forces. IMO, this needs done for the scenario to have any balance. It is just too heavily Allies IMO as is.

marco2marzo Tue Feb 13, 2018 10:58 am
good h2h scenario, it is a long one so dont rush your operation, plan is is crucial choose wisely where you will attack