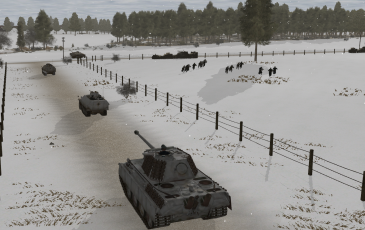 M.J.H. Thu Jun 02, 2016 12:59 am
This scenario is a meat-grinder. Two infantry companies (+) face off over a town square. Players are challenged to find local fire superiority and close with or flank the enemy (both of which are not easily accomplished).

Mudking Frid Apr 26, 2019 12:13 pm
Well that was the last turn and I managed to scrape out a minor victory – just barely – it felt like more of a draw to me. I had managed to take out a few more men and keep one Victory Location – the Intersection, which was the only VL assigned to both sides, neither side was close to the second VL. With losing six men in the last turn, I expect I could only just manage to keep a hold on what I had, there is no way I would have been able to force the Germans off the last VL at the edge of town. In fact, looking at the enemy now, there were many ‘green’ and even ‘conscript’ squads, no wonder they broke and ran so readily – with better troops, the Germans would have pushed me hard, but they certainly had sufficient forces to hold the edge of the town – I had mostly ‘regular’ troops. I think this scenario is pretty balanced with victory difficult for either side. I would like to see a little less time pressure – I definitely lost some men because I risked advancing due to the clock, when otherwise I would have been trying to advance more cautiously.

Guardsman Sun Dec 13, 2020 6:09 pm
a furious close quarters firefight in a village. Nice map, designer is a sadist who puts nearly all doors enemy side! A great infantry fight without armour or arty.

Gamma Sun Mar 27, 2022 6:01 pm
I see what the scenario creator was going for, a cat and mouse blast fest that would lead up to some fierce town combat.

The buildings force Axis to use demo charges to enter and given the layout of the many buildings with easy access doors for Allied allows them to spread out their base of fire and forces Axis to hole up en mass. Troop quality varies on the Axis side with Green and Conscripts being mostly useless. Flamethrower troops would have been clutch had they made it in range of anything.

I was simply kettled into my staging area on move 2.

cplkrotz Thu May 19, 2022 11:58 pm
This was an incredibly boring scenario. The way it is designed leaves few options. It was just a big firefight at first but then left little room for maneuver. If you tried the flanks you would be slaughtered as it was all clear ground with clear fields of fire. I could not wait for it to end.