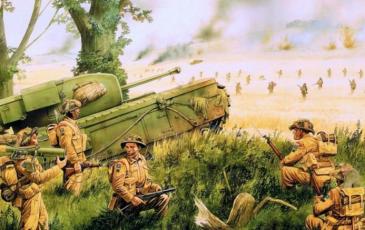 This scenario focus’s on the British 2nd Army’s ‘Operation Bluecoat’ that that supported the west flank of the Normandy beachhead (i.e. Operation Cobra). This attack was opposed by fringe forces from the German 7th Army & the LXXIV Korps of Panzergruppe West with the 276th Volksgrenadier Division defending west of the Drôme River and the 326th Infantry Division defending south east of Caumont.

The scenario here specially involves 15th Scottish Division supported by the Guards Tank Brigade against the remnants of the German 326th Infantry Division along with a few units from the 654th schwere PanzerJager Abteilung. It is a fairly large battle and involves over two dozen Churchill heavy tanks supported by an infantry battalion with 4 rifle companies and a number of other miscellaneous units, while the German side consists of a remnant infantry battalion with 4 rifle companies, a Fusilier battalion with 3 companies, a remnant panzerjager company with a handful of ‘Marders’, along with a mixture of other infantry, anti-tank and flak guns. Note: although this scenario involve units from the 654th sPzJgr Abt., they play small, but important, role late in battle. I decided to minimize the involvement of heavy jagdpanzers to focus more on the conflict between the Guards/ 15th Scottish Division units vs the German 326th Infantry Division.
Show Complete Player Voting Stats
Show Complete Gaming Records

Duff Sat Aug 22, 2020 11:47 am
A huge slugfest without much if any subtlety, this is nevertheless a lot of fun. The map is well designed, though tactical options seem limited. Despite some asymmetry of forces, I felt it was well balanced given the difficult terrain and demanding victory conditions for the Allies.

Lond0ner Sat Aug 22, 2020 1:18 pm
Not sure these sorts of set piece assaults work particularly well with the CM engine but there's at least lots of big bangs!

General Panic Mon Aug 31, 2020 11:45 am
To much time allowed for the allies to bludgeon their way to the last VL. By the time the jagdpanther's arrive they have such a small area to maneuver.
Rich, aka GeneralPanic

Stonecutter Tue Sep 22, 2020 11:33 pm
A big mismatch of forces in favour of the allied player in this one. The hordes of British tanks have enough time to push through the entire area and wipe out resistance before the German armour arrives.