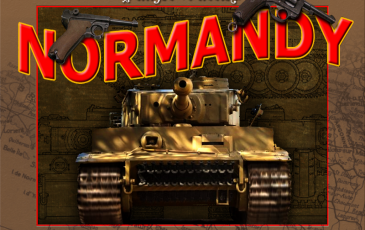 Caen France, July 18, 1944 (Scenario Size: Army. Play Head to Head including team play). Operation Goodwood was the brainchild of British Lieutenant General Dempsey. It called for putting the three British armoured divisions under the command of VIII Corps and attacking on the east side of Caen. The VIII Corps commander, Lieutenant General O'Connor, had commanded armoured forces in North Africa, including being field commander during Operation Compass, which destroyed a large portion of the Italian Army, and forced the Germans to deploy troops to North Africa. However, he was captured in 1941 and spent two years in an Italian prisoner of war camp before escaping and returning to England. As a result, O'Connor's thoughts on the use of armour on the battlefield were somewhat outdated. This was not helped by a poor plan that called for the three armoured divisions to cross the Orne River into an already crowded bridgehead. The artillery was forced to remain to the west of the Orne and as the British tanks advanced, they soon outran the range of their guns. Only the 11th Armoured Division would be able to deploy for the attack in the bridgehead. The other two divisions would have to cross the congested river and canal crossings after the attack started. And the armoured divisions were not to be used as true combined arms forces. The motorized infantry brigade of the 11th Armoured left their trucks behind and was given orders from the corps commander that separated them from the armoured brigade. The motorized brigades of the other two armoured divisions were so far back in the queue to get across the river that they did not see any significant action until the following day. The Germans on the east side of Caen knew that the British were going to attack in their sector. The German forces had been battered since the Allied landing and very few replacements had arrived. They no longer had the necessary forces to hold a solid line and instead they used a thin infantry screen with mobile forces behind them forming a defence in depth. While the area east and southeast of Caen was relatively flat and without the hedgerows that had made attacking further west so difficult, it was covered with a grid of small villages and hamlets about a kilometre apart. The villages were mainly built of locally quarried stone and the German defenders turned each one into mini-fortresses. In addition, infantry divisions were beginning to arrive from other sectors, which allowed the German panzer divisions to pull back behind the lines, regroup and rest. Operation Goodwood was not the only attack that would take place on July 18, 2014. The Canadians had finally wrested Caen away from the 12th SS Panzer Division. Operation Atlantic was an attack by the II Canadian Corps on both sides of the Orne River. Two brigades of the 3rd Canadian Division would push south on the east side of the river and clear the industrial areas of Colombelles and Mondeville. The division's third brigade was in Caen and would attack across the river if the opportunity presented itself. The Canadian 2nd Division's baptism of fire in Normandy would be an attack to the west of Caen also crossing the river with the goal of reaching the western end of Bourguebus Ridge. One of the main elements of Operations Goodwood and Atlantic was the use of strategic bombers in the tactical role. This had been tried before during Operation Charnwood, but the target area was far behind the lines and did little to hamper the German defences. This time, the plan included the use of US and British heavy bombers as well as US medium bombers to prepare the advance. Several German units were caught by the bombardment and the troops and equipment that survived the onslaught were battered to the point of uselessness. It would take time for these men to come to their senses and then clean the dirt and debris out of their weapons. Meanwhile the British tanks began their advance. Notes: This scenario uses obstacles and minefields to represent the rubble, debris and shell holes created by the aerial bombardment. The infantry companies of the 159th Infantry Brigade should remain 'On Foot" throughout the battle as their trucks were on the other side of the river.