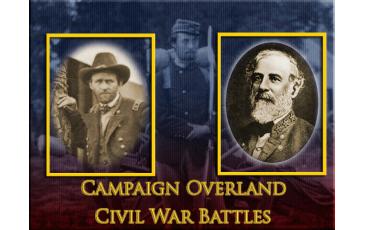 Campaign Wilderness, starting at 0700 hours, 5 May. Cavalry action on Catharpin Road is depicted in a separate cavalry scenario. The Confederate 2nd and 3rd corps are driving east on the Orange Turnpike and the Plank Road, respectively, aiming to engage the Union forces as deep in the Wilderness as possible. On the Union side, the Fifth Corps is halting its march toward Parker's Store and turning to face the threat to its right flank. Behind the Fifth, other units are bumping to a halt as Grant and Meade formulate a response. The Second Corps, originally assigned to hit the south flank of the old Mine Run fortifications of the previous autumn, is about to turn north to preserve its communication with the rest of the Army of the Potomac.