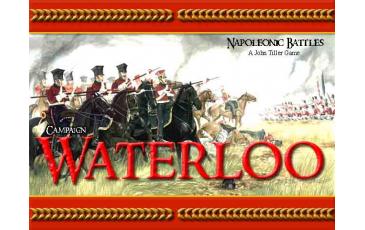 By Charlie Cutshall
6 - 0 - 7
The Battles of Waterloo and Wavre (historical setup) - June 18, 1815 - (Large scenario) - This scenario places all French, Prussian and Anglo-Allied forces present at Waterloo and Wavre on the battlefield. Units have been fixed and have variable and fixed release times to simulate the historical fog of war. At Waterloo Napoleon has his troops assembled for the assault. Wellington's troops are deployed and ready. Grouchy is approaching Wavre cautiously. Blucher has detached Thielemann and his III Korps to protect the Prussian rear.
Show Complete Player Voting Stats
Show Complete Gaming Records

agmoss99 Thu Jul 23, 2020 7:02 pm
The new No Detached Melee rule caused all sorts of issues. In the end a routed skirmisher prevented the French from retreating off the exit hex as the French units remaining were all detached.

Points for supply. Also a big issue as they are worth so much. And exiting them is now worth points.

Pretty absurd to have the French heading to Brussels with a large allied army in the rear. Should be no exit hexes or at least one in the south for the allies.