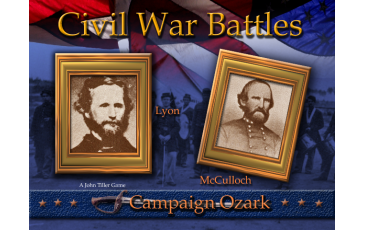 The Battle of Pea Ridge

Facing the daunting Union fortifications at Little Sugar Creek, Van Dorn decided upon a daring and extremely risky plan. He would take his entire army and interpose it between the Union army and its line of communications. The Bentonville Detour sweeps to the west around the Union lines and to their rear at Cross Timber Hollow. Unfortunately, an all night forced march was needed. Extreme fatigue, the cold, disorganization, and dealing with felled trees at both ends of the detour, all served to scatter the army all along the road and when dawn came only the head of Price's column was in position. Nonetheless, Van Dorn was squarely in the enemy's rear. General Green, with the supply trains, is so far behind the marching column that he may not arrive at all for the battle.