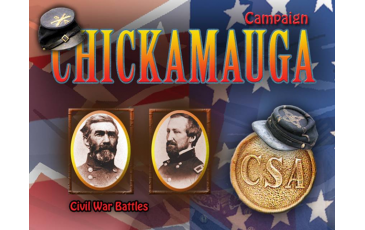 (Historical, 35 Turns) The 19th of September 1863, was a bloody day. That day, 8,000 CSA and 7,000 USA troops were made casualties of war. As Sheriden approached the battlefield near Viniard farm with a fresh division, dusk was near and though Sheriden was certain he could roll up the Confederate left flank, the other Union troops were too tired and declined to attack. During the night of the 19th, both commanders prepared to fight an even harder fight when daylight would break on the 20th. Thomas created a salient near the Kelly farm and prepared breastworks to greet Braggs' Army of Tennessee. Both armies were tired, but determined to win the day.
Show Complete Player Voting Stats
Show Complete Gaming Records