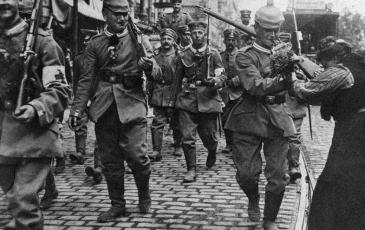 France, 15th August 1914, the German invasion of France and Belgium: This scenario is part of the "Grand Campaign" series, which is a set of scenarios that are intended to be played in sequence and the result of each deciding which scenario to play next which eventually decides the outcome of the war. All Grand Campaign scenarios are intended to be played as head-to-head with another player (or as a team game with a group of players). Refer to the notes document for all instructions regarding the Grand Campaign and how to proceed through the campaign based on the outcome of this scenario. [Size: huge] *See notes document's Grand Campaign Notes section in the notes document to understand how the campaign is supposed to progress after this scenario, and refer to thenotes specific to this scenario to understand how many Campaign Victory Points are obtained after this scenario is played. *Also, see the notes to read about the various Strategy and Operation (S|O) selections, and be aware that some of the Central Powers S|O selections must match in EP-14A otherwise that side will forfeit BOTH scenarios. *This is the GRAND CAMPAIGN'S START SCENARIO, unless the prelude scenarios are played (see notes document).
Show Complete Gaming Records